Sometimes when we’re not working on Andrecca, we craft other nerdy things. Becca does a lot with clay, yarn and beads when she can. I usually don’t get too crafty, but this year I decided I wanted to custom paint some controllers for Becca’s birthday.  She really likes to get her hands on pink controllers whenever she can.  She has a pink Wii Remote but there aren’t a ton of other accessories out there that are pink, unless you want to chance it with off brands.  Becca is a big fan of the Mario Kart franchise, especially Double Dash.  So I decided that she needed to have a pink Wavebird GC controller along with a pink Wii Wheel.
This was my first venture actually painting something like this, but I used to work in an auto body shop in high school and did basically everything but paint.  So I wasn’t really worried about the prep work on it, but I was still a little nervous about the actual painting.  I had seen it done multiple times so I trusted that I could do at least OK, but I was still ready to re-try on another controller. After looking up some online tutorials to ensure I wasn’t forgetting anything, I took Becca out to a few different shops to find the right kind of spray paint and the colors that she’d like. Since I’d have to do all this in our garage I knew that I couldn’t really keep it a secret so I may as well let her pick out the colors. 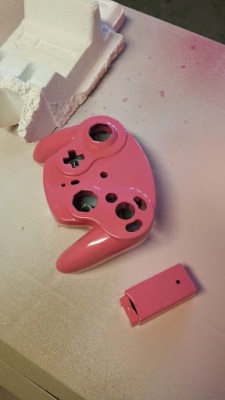 Since this was the first time that I’ve done anything like this, I basically had zero resources to get this done. All I had was a place to do it.  So I drove around town getting various things I’d need. Spray paint, mask, screwdriver (Nintendo controllers use a special headed screw), rags, rubbing alcohol, sandpaper,  etc. I basically didn’t have anything to do this, I even had to build my own work stands with old chairs and cardboard. Once I got everything I got started and had a couple pretty late nights. I wasn’t really nervous about messing up, I read some good tips others gave on the Internet and I knew I could always try again on a different controller if I messed up too bad.

Overall I think I did a pretty good job! Becca liked them anyway, which is what counts the most, right?? Especially for my first time and with the tools I had to work with. I learned a good deal though, one notably being not to buy “classic” style spray cans. I my clear coat was like that, which had to go on ALL of the pieces. They’re terrible on your index fingers, but at least I learned that I can paint with my left when I need to give my finger a rest! Haha! 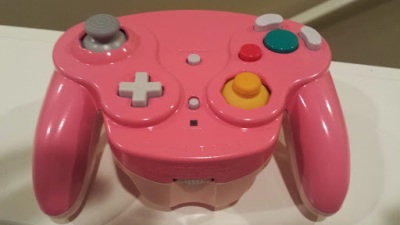 I’m probably going to do some more in the near-ish future when I have free time. I’m thinking Mega Man colors would be cool.  What colors would you use?