Growing up in the 90s was pretty awesome. The videogames are/were so amazing to me. There was just one thing that I wished I could change about them, I wanted more character customization. Don’t get me wrong, I love games with iconic characters, like Super Mario 64 as an example. Playing as Mario makes sense, but as a kid I thought “I wish I could make this Mario feel more like me.” Maybe give him a pink hat instead of Red, or be able to change the color of his overalls. A majority of the games from that era seemed to be a “here’s the character, now play” type of design. The only game that I played back in that time that offered a kind of specific customization was Super Smash Brothers, and I remember being blown away that I could play as a red Link if I wanted to.
Now that I’m older I definitely realize that there were a lot of limitations on games back then. The data limitations on a Nintendo 64 game (64 megabytes), are so small compared to what can be done in this day and age.

So when Andrew and I began work on a game that would be done in a 16-bit art style, I didn’t want to limit our players to just a couple different character models. Especially since we’re working on an action puzzler, and not a role-playing game where you would be following the story of one specific character.

Initially in working on art I wanted to create just one character to start with, so that I could get a feel for making all of the movements for one character before moving on to others. The character was modeled after Andrew, and he’s been the main sprite that we’ve used for testing. Recently I’ve started branching out into making additional characters and customizing them. We don’t have a set number of how many different customization options we’ll have yet, but I’m sure that closer to the release we’ll have more information on exactly what options there will be. 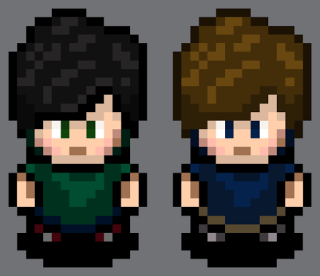 The picture at the top of the post shows a couple different options of customized female characters. I modeled one after myself (she’s the one with the brown hair and the pink shoes), as for the others, I wanted to show a little bit more diversity in the clothes, hair and skin tone. They’re all still works in progress of course, but I wanted to be able to show what the customization could look like for the characters.
To the right, this picture shows two sprites modeled after Andrew, and just shows how slight variations in the character’s coloring can make characters feel different. The two sprites have the same body and hair, but just the changes in the coloring seem to give them two different moods. I really look forward to seeing the different combinations that players come up with when they make a character. Even just subtle differences seem to make a character more personal, which is important to me when I invest time in a game. Even though other people are playing the game, having your own character makes it feel a little more special.
While customization is a priority of mine, I don’t want the customization to be time consuming for the player. For instance, you can put a lot of time into making a Mii and it doesn’t take away from game time. If you had to make a new Mii before starting every game you played, it might become tedious and annoying. I want to give players the option to quickly choose a character with the customization selections available and not have it feel cumbersome. That way if the player does want to create a new character every time, they could without it taking away from playing the game.
Since people who play videogames are all different, I know that customization is not important for everyone. For the players who are just looking to pick a pre-made character and start playing, that’s something that we’re also looking at. Whether it will be set characters to choose from or randomly generated characters is still yet to be determined. Returning players will also have the choice to play as a previously customized character. That way the player doesn’t have to customize a character every single time (unless they want to of course).
With all this talk about the work we have already done, I cannot wait to have more of the game finished so that I can share more information! We’re definitely gong to bring the best of “old school” style gameplay with “new school” features. I’m already so proud of what we’ve accomplished, and the game seems to grow a little every day.
Advertisement