Hey there everyone, it’s been too long since I posted something here, and tonight it’s going to get personal. I’ve had some struggles with stress lately, and the roller coaster of all that stress is finally coming to the end of the ride. I can breathe, and that has given me a lot of internal reflection also. I’ve done a lot of art recently, since we’re coming to our deadline of a test of our game. We’ve landed on an official-ish title, I’ve found a good place for inspiration, and we’re having what I’ve started calling “workends”. It hasn’t been sunshine and rainbows everyday, but every low has just pushed me to up my game (pun totally intended). Oh, and I found out that most forums on the internet are all the same. The comment fights about nothing are amazing, but the egos some people have are incredible. More on that later though.

So let’s start with the first “I” in the title, Insight. So here’s a little insight into what we’re doing, and how it’s going. We’re working on our game most nights a week. I’m doing art everyday even if it’s just some tweaking or something tiny. My husband (sorry it’s still just so awesome to get to use that word now), is just about always at his computer working. Last night, around midnight he finished the majority (if not all) of his debugging so he can actually work on the game’s features, which is really exciting for both of us. For awhile there, on the board there was a tile that was like an insta-dead tile. Which I’m fairly confident is the scientific term for that… It’s fixed now though, so that’s a small win. 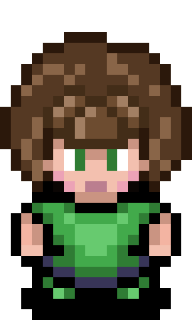 As far as what I’m working on, I have made a fully animated female sprite. Both of the male and female sprites need a couple touch ups before we let you guys play, but they are workable and look pretty good. Both genders are set for the color customization we have for players. Originally the female sprite was set to look much different than the character (seen on the right), but neither Andrew or I were very happy with her look. So we basically scrapped her, and created this one, which we are much happier with. This was after I had already done some animation for the other style, so that stung a bit, but I am much happier with our end result. I feel like this is a female character that I would pick, even if I wasn’t the designer. Seeing the sprite in action in a test game last night had me a little choked-up, until I realized I was playing my game and had to destroy Andrew.

That brings me to something that I feel I should shed some additional light on. With all the attention the new Smash Bros is getting, I feel I should make it clear that this game will have enemies to fight, so it’s not a fighting game by any means. We classify our game as an action-puzzler, not fighting, platformer, or first person shooter. Those might be neat games, and there’s absolutely nothing wrong with them, but it’s not where our game is going. Since currently I haven’t fully animated enemy sprites, the only enemy that I have when I play is Andrew, so therefore, he must be destroyed.

Indies, are some of the coolest people on the planet. Or at least, they can be. Like all people in a group some are amazing, and some bad apples can try to ruin the bunch. Recently I’ve been looking into different Indie Dev forums and some of it is great and helpful, and some remind me of how myspace comment fights were. Andrew and myself work hard, and want to make a game that we’re proud of, but we have learned to take constructive criticism from each other. I don’t get a ton of feedback on my artwork when I put it out on the twitters (that’s how the kids say it, right?), but I
know two things:

To sum up number one, some people just want to get under your skin, get to you, and hate on what you’re doing. This is different than constructive criticism in the way that they’re not giving you anything constructive to work with. Someone saying “That’s shitty art” is different than saying “It looks like that charater’s legs are uneven.” The second statement gives you something to look at, and fix (if you feel there’s a need to). The first statement is just an opinion with nothing for you to build off of to make edits.

As for number two, I’ll explain it with a real life scenario. I am a picky eater. Very picky. I learned to cook because I am so picky. There are foods Andrew likes that I dislike. Take for example mushrooms, I cannot stand them. Andrew likes them, not his favorite food or anything, but he still likes them. I don’t dislike Andrew because he likes something I like. Just like I don’t dislike an artist because I’m not into the work they’re doing. It doesn’t mean they, or their work are bad, I’m just not into it.

Those two things are what I try to remember for when I am working on art, looking at forums, and really just trying to get better at what I’m doing. I’m still new at this, and I don’t try to paint myself (pun intended again), as anything more than that. If someone has helpful critiques for me, I’ll take it, with a grain of salt, but I’ll still take it.

Some of the folks on these forums seem to not know the difference, and get kinda crazy about it. I

think this is what helps perpetuate the negative stereotype of gamers, and game developers. Some people feel like it’s a personal attack to get feedback on their game. I read the comments, and I try to put myself in the developer’s shoes by thinking, “what if someone said that about OUR game?” Generally the answer is that the feedback is handy information to have. It’s an insight into what a potential customer, critic, tester, or even a friend, might have to say about your game. Why not take that feedback and run with it, instead of trying to beat the person verbally about how nothing needs to change for the game to be perfect. I see the side of feeling personally attacked, but part of putting yourself out there is getting feedback, good or bad. If you genuinely disagree with what someone has to say, give them reasons why your way is how you want it, and then leave it alone.

So this post turned out way bigger than I had initially thought it would. Now it’s time to make dinner, so I’ll save my bit on inspiration and my internal independence (and what those words mean to me) for tomorrow. This has been a pretty personal look at what I’ve been doing and how I feel, but if you have questions specifically, please ask them in the comments, I would love to answer them! You can also tweet us I’m @cupcakeyarn and our team is @TeamAndrecca, and I can answer your questions there too. Stay tuned for Part Two tomorrow!